No Surprises – circa unknown 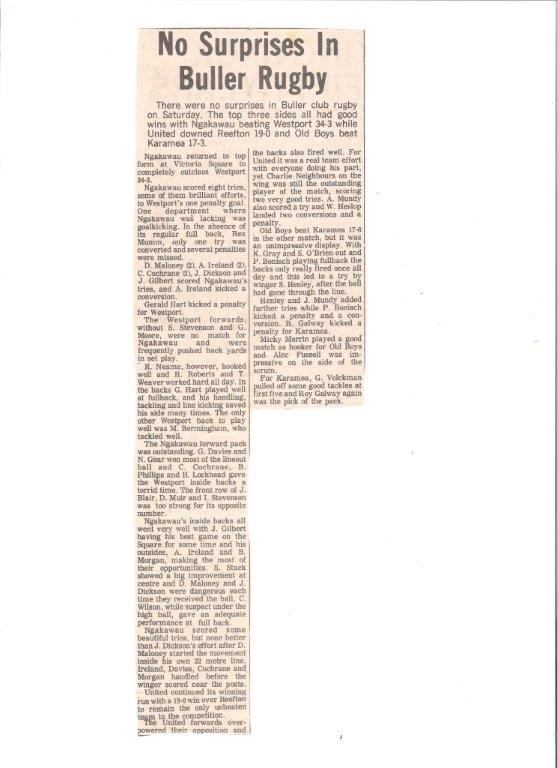 R.Neame however, hooked well and R. Roberts and T. Weaverworked hard all day. In the backs G. Hart played well at fullback, and his handling, tackling and line kicking saved his side many times. The only other Westport back to play well was M. Bermingham, who tackled well.

The Ngakawau forward pack was outstanding. G. Davies and N. Gear won most of the lineout ball and C. Cochrane, B. Phillips and H. Lochhead gave the Westport inside backs a torrid time. The front row of J. Blair, D. Muir and I. Stevenson was too strong for its opposite number. Ngakawau’s inside backs all went very well with J. Gilbert having his best game on the Square for some time and his outsides, A. Ireland and B. Morgan, making the most of their opportunities. S. Stack showed a big improvement at centre and D. Moloney and J. Dickson were dangerous each time they received the ball. C. Wilson, while suspect under the high ball, gave an adequate performance at full back.

Ngakawau scored some beautiful tries, but none better than J. Dickson’s effort after D. Moloney started the movement inside his own 22 metre line. Ireland, Davies, Cochrane and. Morgan handled before the winger scored near the posts.

United continued its winning run with a 19-0 win over Reefton to remain the only unbeaten team in the competition. The United forwards over-powered their opposition and the backs also fired well. For United it was a real team effort with everyone doing his part, yet Charlie Neighbours on the wing was still the outstanding player of the match, scoring two very good tries. A. Mundy also scored a try and W. Heslop landed two conversions and a penalty.

Old Boys beat Karamea 17-6 in the other match, but it was an unimpressive display. With K. Gray and S. O’Brien out and P. Bonisch playing fullback the backs only really fired once all day and this led to a try by winger S. Henley, after the ball had gone through the line. Henley and J. Mundy added further tries while P. Bonisch kicked a, penalty and a conversion. R. Galway kicked a penalty for Karamea. Micky Merrin played a good match as hooker for Old Boys and Alec Fussell was impressive on the side of the scrum. For Karamea, G. Volckman pulled off some good tackles at first five and Roy Galway again was the pick of the pack.