In the 1970s the Senior Shield was decided on the first two rounds of the competition. There was no final unless, as had happened in 1974, two teams were level on points after the two rounds. After this big win against United, Ngakawau was virtually assured of Championship honours because all the other teams had lost at least twice, while Ngakawau remained undefeated. 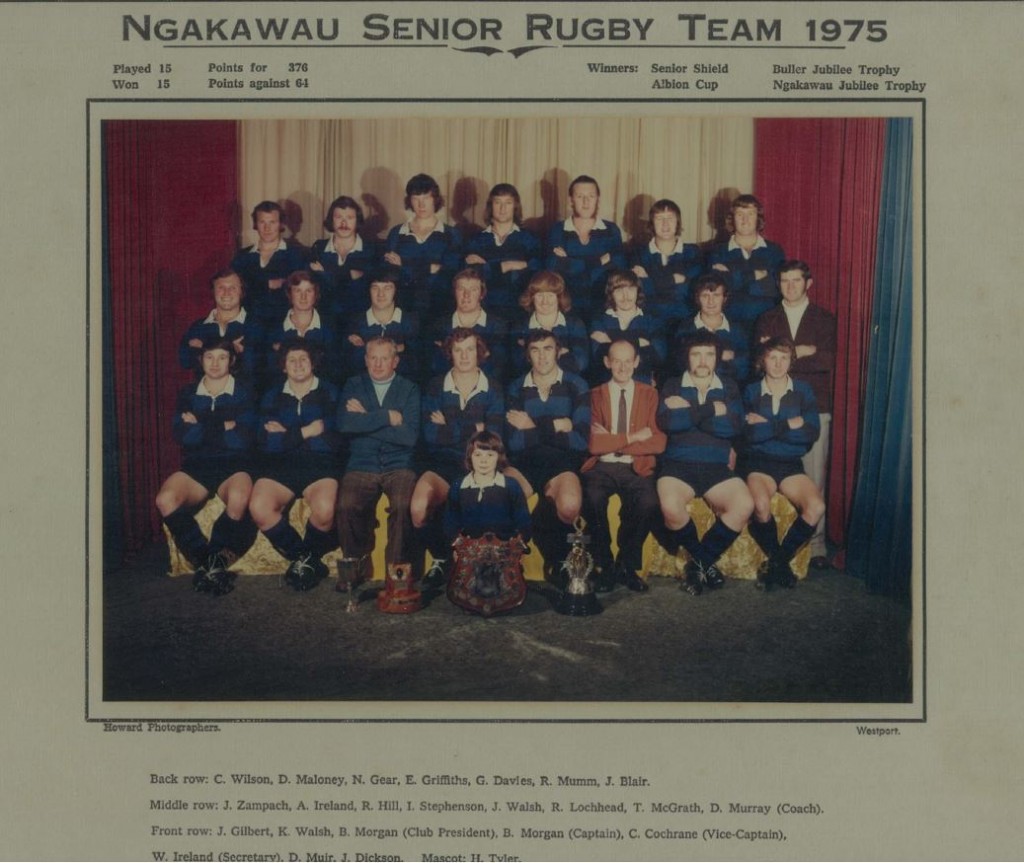 Ngakawau looks set for an easy ride to championship honours in the Buller Rugby Union’s senior competition after outclassing United in every department and winning 23-3 at Ngakawau on Saturday.

It was the main game of the senior competition and was an important one for the unbeaten Ngakawau side, which drew with United for the senior shield last year.

The score at Ngakawau flattered United. With a little more luck and better handling the victors could have added four tries to their total of three. The other points came from two penalty goals and a field goal to United’s penalty goal.

A large crowd watched the encounter in fine weather and on a perfect ground.

Ngakawau kept constant pressure on United in the first 20 minutes and only desperate defence and handling errors prevented Ngakawau from scoring.

The United fullback R. Hall had an unhappy start and was unable to handle the many high kicks sent to him.

Capitalising, Ngakawau pressed hard and first five eight Alan Ireland dived for the line but lost the ball in the process.

Then B. Morgan, outside him, made a great run and created second phase play by the posts. The halfback J. Gilbert ran the shortside and unloaded to winger J. Zampach, who drew his opposite, C. Neighbours and fed the fullback R. Mumm for the corner try. Mumm converted the try.

United had a short time on attack after wing B. O’Connor kicked deep when Ireland knocked on, but the cover defence was there.

Ngakawau was penalised soon after for a late tackle and prop T. Aldridge kicked the goal. Ngakawau kept up the pressure for the remainder of the half and went close to scoring several times. Only a desperate tackle by J. Beveridge prevented the centre, J. Dickson, from going over in the corner after a break by Morgan.

United was fortunate to be only three points down at the interval. The home side continued to play hard in the second half and there was great excitement when Mumm caught a clearing kick by Hall and added points with a drop goal.

Attacking again Ngakawau attacked down the right side of the field and when Ireland was stopped the ball went to Gilbert and then Morgan who ran 20 metres before passing to No. 8 C. Cochrane, who was strangely playing left wing. He left two defenders spread-eagled as he ran for the line. Mumm missed the conversion. The score was 13-3.

United then began to play its best rugby, but each time it looked dangerous somebody would kick away possession, usually into the safe hands of Mumm-who put the seal on victory shortly after when he kicked a penalty goal.

An attempt by the United backs to run the ball ended in disaster when Morgan intercepted, ran 40 metres, passing two of the rearguard on the way, and scoring in the corner. Mumm missed the kick but succeeded with a penalty goal later.

It was a most impressive display by Ngakawau, an effort which was once again well directed by Cochrane and N. Gear, supported by G. Davies and E. Griffiths. R. Lochhead and Cochrane were likely in the loose. J. Blair took the tighthead honours.

Gilbert, Ireland and Morgan played brilliantly and the three quarters, Dickson, D. Moloney and Zampach gave them great support. Mumm was sound at fullback and no doubt will be pleased with his goal kicking.

The United forwards played well but were outclassed. W. Neighbours and R. Hughes won good lineout ball while Beveridge and K. Prentice covered well. The halfback B. Cargill came through a torrid time well but the five-eighths, A. Moseley and A. Mundy kicked too much and most of their kicking was poorly directed. Neighbours tackled effectively but was not given many chances. Hill after a shaky start, improved in the second half. The game was played in good spirit and was well controlled by Mr. C. Alford.

Old Boys, which had one previous loss, need victory to stay in contention for the championship but it was beaten 9-3.

It was a dour, hard fought match and, while the standard of rugby was poor, the closeness of the tussle provided some excitement.

Apart from a penalty goal by K. Gray, which gave Old Boys a 3-0 lead at halftime, the first spell could only be described as scrappy.

Fortunately both teams came alive to a certain degree after the interval and the game developed some urgency when G. Hart levelled the scores with a penalty 14 minutes into the half.

Up to this point Old Boys had dictated play. However with a new lease of life, Westport took the initiative and in the twenty second minute loose forward N. Roberts scored beside the post after the halfback R. Atkin went through on the blindside and then centre kicked. G. Hart made the conversion.

Old Boys tried hard to regain control but stout defence by the Westport backs, especially P. Storer, kept them out.

For old Boys C. Smith and C. Brownlie won a feast of ball while two other forwards, R. Young and P. Rodgers harassed Atkin all day. Both wingers, P. Gardner and S. O’Brien ran hard but the best back was Gray.

The Westport loose forward T. Weaver had a good game but the hardest worker on the field was Roberts. The backs tackled well but were sluggish on attack. M. Hart, who is improving from week to week was the best back and his soundness at fullback paved the way for Westport’s victory.

White Star outclassed Karamea 29-0 in the early game. It was a bright open encounter with both sides willing to run the ball.

Victory went to Star because its forwards won the ball from set and second phrase play and the backs capitalised on the possession.

Tries were scored by T. Davidson (2) and B. Walsh (3) and P, Stewart who also kicked a penalty and a conversion. G. Volckman and R. Goldie were sound five eighths for Karamea while R. Galway played his usual hard game in the forwards.

The referee, Mr E. Fox made a good job of controlling his first senior match.

The Jubilee Trophy began in 1969 and was for the match between the Buller and West Coast Champions. This trophy has not been always given the status it is due but in 1975 Ngakawau were determined to wrest the Trophy from Blaketown after they had been beaten 19-9 by the same team on Rugby Park, Greymouth at the end of the 1974 season. Ngakawau were right in that game until an all-out attack by the visiting team ended when Blaketown scored courtesy of an intercept try.

The 1975 game was played at Patterson Park.

Ngakawau convincingly beat Blaketown 25-3 at Westport on Saturday to become the top senior rugby team of the region. The Buller Club champion side Ngakawau also took the Jubilee Cup from the holders Blaketown. It was a bruising encounter and spectators were wondering just what they were watching in the first half.

Rugby seemed to be a secondary consideration and the spectacle looked more like the West Coast boxing championships, with about 10 players swapping blows on one occasion

Reefton referee Ian Diprose almost lost control; however, the players settled down as the game progressed.

Body tackling by both sides and some tackling, especially by the Ngakawau inside backs, did not help matters.

Blaketown had the advantage of a stiff wind blowing diagonally across the field in the first half and they enjoyed a territorial advantage and a feast of lineout ball.

But despite all this, they could make no impression on the Ngakawau defence, which was all the more impregnable because of a brilliant performance by fullback R. Mumm.

It must have been Mumm’s best exhibition to date. He was always safe and his kicking was magnificent, especially in the first half when he handled a difficult wind well. There was another important factor in Ngakawau’s victory and that was the performance by No .8 and Captain C Cochrane.

He has been criticised in the past for hanging back on attack but was right up front on Saturday and his work off a scrum in the second half produced the best try of the match.

Ngakawau were leading 15-3 when Cochrane left a scrum near the Blaketown line and doubled as half-back. First five Ireland ran outside him second five B. Morgan came in.

This movement completely broke up the defence and centre C. Wilson had a clear run to the line when he got the ball from Ireland.

The visitors replied with a penalty goal towards the end of the half.

They should have been leading at this stage, but first five R. Nelson was not using the boot and the wind enough while bad handling by second five W. Leach and centre J. Gage spoiled other chances.

Halfbacks T. Bromley and J. Gilbert were fairly evenly matched, but the Ngakawau inside backs, Ireland and Morgan, were clearly superior, especially in the second half.

Despite a chronic lack of ball the home side really came away in the second spell and used the wind to advantage.

Their first try came when the ball moved through the entire backline, which included the blindside winger and Mumm, to Dickson. He headed for the corner and threw an inpass to Mumm, who scored and converted.

Ireland added another three points with a field goal and then Wilson scored his try.

The last points came from a touchdown by Gilbert following some good work by Morgan and Wilson. Mumm missed the conversion.

Blaketown tried several spirited forward rallies in the second half and there was some superior play by No. 8 D. Hennan, lock M. Sinclair and flanker M. Thorn but inevitably Mumm sent them reeling with long kicks. Apart from Cochrane, hooker J.Blair and flanker E. Griffiths were Ngakawau’s best forwards.

It was a bad day for fighting in Buller rugby on. Apart from the flare-ups in the Ngakawau-Blaketown match the White Star-Old Boys senior game ended in a punch up with the referee, Mr J. Tyler, ending the match minutes early when a spectator joined in the fray.

White Star won 4-3 after a scoreless first half.

Karamea ended its run of surprise victories when it was beaten 16-3 by United at Waimangaroa. United will now play Ngakawau to finalise the Albion Cup competition.