The final game of the 1975 season was the Albion Cup final. In this particular year the teams were divided into two sections with the winner of each section to face off in the final on Victoria Square. United beat Reefton 18-0, Karamea 16-3 and drew with Westports 10-10 to qualify. While Ngakawau had huge wins over Old Boys 32-6 and White Star 31-0 for the right to play them in the final. The stage was set for the two country teams to once again do battle on the same ground they had fought out a 7 all draw on twelve months previously. For Ngakawau there was the chance to complete an unbeaten season and to complete the grand slam of trophies. For United there was the chance to exact some revenge on their northern neighbours and to end the season on a high note. Once again it proved to be a classic encounter. 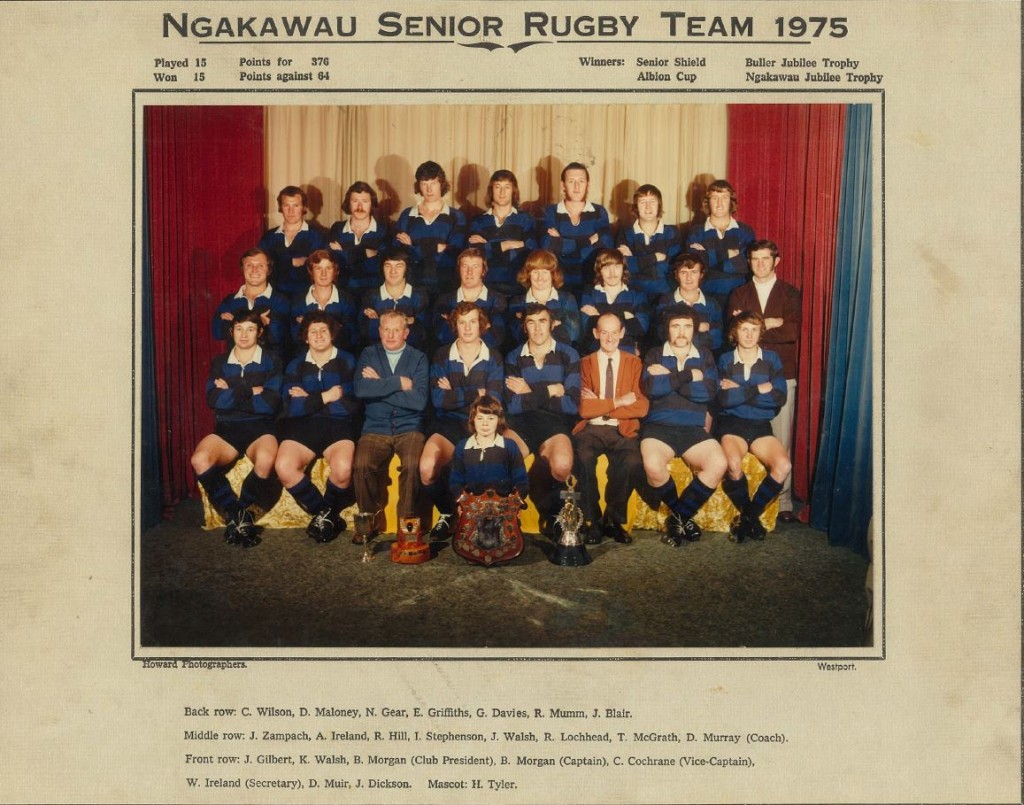 Ngakawau, an easier winner of earlier games, had a hard battle to complete the grand slam in the Albion Cup Final at Victoria Square on Saturday.

It won narrowly, 14-13 with the deciding try coming in the last two minutes, reviving memories of that thrilling end in the senior championship last season when Ngakawau got a last minute try to draw against the same opponents.

Ngakawau added the cup to the Senior Shield and Jubilee Cup, a symbol of Buller-West Coast superiority, while the award of the special trophy for the team playing the most attractive rugby in all grades now seems to be a mere formality.

With only a gasp or two left in the hard working 30 players not one shirked his responsibilities. Tom Aldridge, who had served United so well as a hooker and hard grafter up front, looked like being carried shoulder high off the field after kicking his third goal out of four attempts, but instead it was the light Ngakawau forager Bobby Lochhead, who stole his thunder with that late try.

United, well beaten by Ngakawau in two earlier encounters in the main competition, played its best rugby of the season and had its opponents well stretched all the way and actually very worried on occasions, especially when the Waimangaroa-based side led by seven to nil at halftime.

Early in the first spell Aldridge kicked his first penalty goal and later when second five Alan Moseley paved the way for a neat blind side for his man inside man, Tony Mundy, it looked like blinds down for Ngakawau. It took the latter some time to get organised in the face of strong defence by Mundy, Moseley and halfback Bruce Cargill while the trio, with Bluey Kerr, were often dangerous on attack.

But Ngakawau brought off some good moves, one really brilliant effort from 70 metres out taking in half the team on a passing rush only for Johnny Gilbert to lose the ball over the line.

It was a more determined Ngakawau team which faced up to the second spell with Calvin Cochrane inspiring his forwards to many onslaughts, usually best supported by George Davis, Neville Gear Ian Stevenson and the ever lively Lochhead. In one sustained raid on the United line, Cochrane seemed to be in six places at the same time. But the northern pack often found the opposition very strong with Bill Neighbours getting good ball from the line outs, Aldridge in great hooking form and Robin Hughes and S.Kerr also to the fore.

It was Morgan who opened Ngakawau’s account with good try coming from a splendid opening by Ireland. However Aldridge soon replied with another goal to put United in a good position again. That rebuff set Ngakawau going with Morgan and Ireland ever probing for openings, but the ball seldom reached the wingers Joe Zampach and D. Moloney in set movements. The fullback Colin Wilson, was proving an admirable replacement for the injured Rex Mumm at full back, but failed badly with his goal kicking. It was therefore left to the versatile Ireland to convert a second try by Morgan, evening the scores. But Aldridge came again with his third flag raiser and it looked as if Ngakawau’s run of wins was to end until Lochhead saved the day with that very late try to give his team a single point victory, but good enough for a dozen under the circumstances.