After Old Boys upset win over Ngakawau in the second game of the first round in 1976 life returned to normal with Ngakawau completing the round with wins over White Star (24-10), Westports (34-3), United (18-0) and Reefton (30-9). The first match of the second round was against their close neighbours United at Waimangaroa.  While Ngakawau had had a big win against the Waimang boys at home in the first round another close game was to eventuate on the Waimangaroa Domain ground. There was a new referee in town, a High School teacher, and he took no nonsense as the Waimangaroa team was to find out, to their dismay. The following report is as it was printed in the Westport News.

United needed the win to stay in the race for the Senior Shield and they had a good chance, leading 9-3 at half time. But three successful penalty goals in the second half gave Ngakawau the honours. Mundy, with Ngakawau trailing 9-6, gave them the chance to equalise when he chastised referee Norm Crawshaw and was penalised. Then Brian Clark refused to bind on the side of the scrum and another penalty goal followed from the unfailing boot of Ngakawau fullback Rex Mumm.

1975 was to be one of the great years for the Ngakawau Club. By the end of the season they had played 15 games and won them all. They had scored 376 points and had 64 points scored against them. They were the holders of the Senior Shield, Albion Cup, Ngakawau Jubilee Trophy (Team playing the most attractive Rugby) and the Buller Jubilee Trophy (Top team on the West Coast.)  The late Bunter Connelly produced these reports for the Westport News and many readers will be enjoy his style of writing and descriptive observations. In an effort to be impartial the results of other club games will be included when possible! 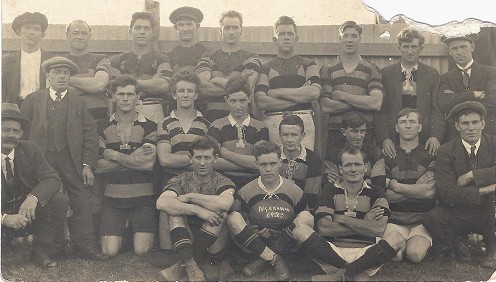